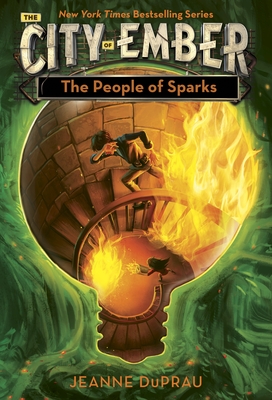 This is book number 2 in the The City of Ember series.

Just when the future looks bright for the people of Ember, a new darkness lurks. This highly acclaimed adventure series is a modern-day classic—with over 4 MILLION copies sold!

Lina and Doon have led the citizens of Ember to an exciting new world. They’ve been given safe haven in a small village called Sparks, a place filled with color and life. But they’re not out of danger yet. Although Sparks seems like the answer the long-suffering Emberites have been hoping for, tempers soon escalate. The villagers have never had to share their world before, and it only takes a tiny “spark” to ignite a battle between the two struggling groups. Lina and Doon will have to work together to avoid a disaster not only for their people, but also for the people of Sparks.

Praise for the City of Ember books: