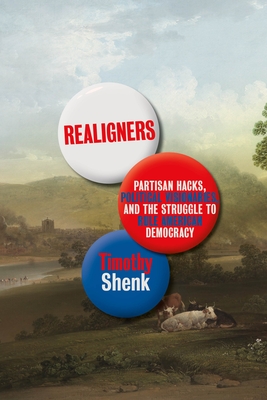 These days it seems that nobody is satisfied with American democracy. Critics across the ideological spectrum warn that the country is heading toward catastrophe but also complain that nothing seems to change. At the same time, many have begun to wonder if the gulf between elites and ordinary people has turned democracy itself into a myth. The urges to defend the country’s foundations and to dismantle them coexist—often within the same people.

How did we get here? Why does it feel like the country is both grinding to a halt and falling to pieces? In Realigners, the historian Timothy Shenk offers an eye-opening new biography of the American political tradition. In a history that runs from the drafting of the Constitution to the storming of the Capitol, Shenk offers sharp pen portraits of signal characters from James Madison and Charles Sumner to Phyllis Schlafly and Barack Obama. The result is an entertaining and provocative reassessment of the people who built the electoral coalitions that defined American democracy—and a guide for a time when figures ranging from Alexandria Ocasio-Cortez to MAGA-minded nationalists seek to turn radical dreams into political realities. In an era when it seems democracy is caught in perpetual crisis, Realigners looks at earlier moments in which popular majorities transformed American life. We’ve had those moments before. And if there’s an escape from the doom loop that American politics has become, it’s because we might have one again.

Timothy Shenk is an assistant professor of history at George Washington University. The coeditor of Dissent magazine, he has written for The New York Times, The Guardian, London Review of Books, The Nation, The New Republic, and Jacobin, among other publications. He has been a Mellon postdoctoral fellow at Washington University in St. Louis and has received fellowships from the National Endowment for the Humanities, the American Council of Learned Societies, and the New America Foundation. He lives outside Washington, D.C.

"Like Hofstadter, Shenk is attuned to the divide between the rhetoric of [his subjects] and the reality of what they accomplished . . . [Realigners] is the book of a left that doesn’t want just to be morally right or to dissent from the peanut gallery, but that has a vision of winning and all that might come after." —Kim Phillips-Fein, The Nation

"Compelling . . . Shenk deftly maps out the genealogy of discord and those charismatic figures it birthed . . . Shenk snaps each piece of his narrative together like a jigsaw, highlighting emblematic characters." —Oprah Daily

“This is an exhilarating book. Shenk sees clearly that democracy can change the world, but that most attempts end in tragedy rather than victory. From James Madison through W.E.B. Du Bois and Walter Lippmann, to Phyllis Schlafly and Barack Obama, his characters stand at this political fault line. Every chapter shines with insight, arresting detail, and vivid judgment. This is a work of political history worthy of a novelist, and a work of political realism that—just—shows how to keep democratic hope alive.” —Jedediah Purdy, professor of law at Columbia University and author of Two Cheers for Politics, This Land is Our Land, and other books

"Realigners announces the emergence of a bold, deeply informed, and highly original new voice in the world of American politics and its history, with special attention to the relationship between political elites and the broader public. Its closest antecedent is Richard Hofstadter's The American Political Tradition, and like that iconic work it is beautifully written and argued, and filled with insights that will inform both specialists and a broader public that wants to know the origins of our current democratic dilemmas." —Eric Foner, professor of history emeritus at Columba University and author of The Story of American Freedom and other books

"Timothy Shenk’s Realigners bristles with historical insight useful at this moment of extraordinary peril for American democracy." —Randall Kennedy, professor at Harvard Law School and author of Say It Loud!

"For better or worse, Americans who want to transform their country have always needed to do the hard work of building coalitions and majorities. Tim Shenk's terrific history shows how to do that—and how to be an idealist at the same time. Today's activists and strategists have much to learn from earlier efforts, whether failures, successes, or the many bold historical experiments that fell somewhere in between. If you care about the past, present, or future of democracy, read this book." —Beverly Gage, professor of history at Yale University and author of G-Man: J. Edgar Hoover and the Making of the American Century

"Combining gripping narratives of political lives with structural insights into the longstanding impediments to democracy, Realigners is a sweeping exploration of how transformative coalitions in the U.S. have been built and lost. Beautifully written and filled with essential insights, it should be read and debated by anyone concerned with the state of American politics." —Aziz Rana, author of The Two Faces of American Freedom

"Realigners is an untimely book, in the best sense. In defiance of fashionable bottom-up social history, Timothy Shenk shows the centrality of leaders in American history, outsiders and insiders alike. In an age of gargantuan biographies, Shenk is a virtuoso of the miniature portrait and the significant vignette. And in an era of polarization and partisanship, Shenk shows that is possible to combine political engagement with respect for those who disagree." —Michael Lind, author of The New Class War