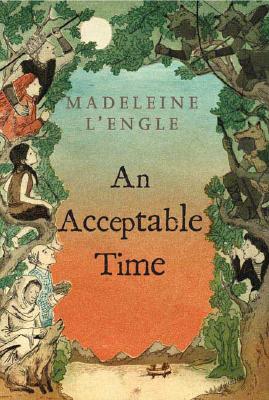 This is book number 5 in the A Wrinkle in Time Quintet series.

An Acceptable Time, the final book in Madeleine L'Engle's Time Quintet, the series that began with the Newbery Award winner A Wrinkle in Time. While spending time with her grandparents, Alex and Kate Murry, Polly O'Keefe wanders into a time 3,000 years before her own.

Under their feet, the ground seemed to tremble.

A flash of lightning, quivering ground, and, instead of her grandparents' farm, Polly sees mist and jagged mountains -- and coming toward her, a group of young men carrying spears.

Why has a time gate opened and dropped Polly into a world that existed 3,000 years ago? Will she be able to get back to the present before the time gate closes -- and leaves her to face a group of people who believe in human sacrifice?

Praise for An Acceptable Time:

“When Polly O'Keefe visits her grandparents in Connecticut, she finds herself caught up in the lives of three mysterious strangers [who lived] 3,000 years ago [and] travels back in time to play a crucial role in an ancient confrontation. . . L'Engle has again achieved the award-winning style of A Wrinkle in Time. . . Highly recommended.” —VOYA

“When Polly O'Keefe visits her grandparents in Connecticut, she finds herself caught up in the lives of three mysterious strangers [who lived] 3,000 years ago [and] travels back in time to play a crucial role in an ancient confrontation...L'Engle has again achieved the award-winning style of A Wrinkle in Time. . .Highly recommended.” —VOYA