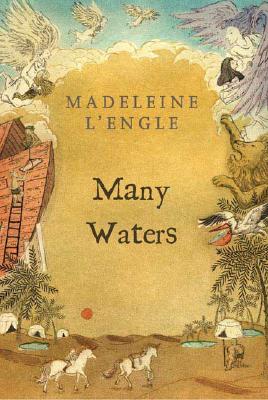 This is book number 3 in the A Wrinkle in Time Quintet series.

The third book in Madeleine L'Engle's spellbinding A Wrinkle in Time Quintet.

Some things have to be believed to be seen.

Sandy and Dennys have always been the normal, run-of-the-mill ones in the extraodinary Murry family. They garden, make an occasional A in school, and play baseball. Nothing especially interesting has happened to the twins until they accidentally interrupt their father's experiment.

Then the two boys are thrown across time and space. They find themselves alone in the desert, where, if they believe in unicorns, they can find unicorns, and whether they believe or not, mammoths and manticores will find them.

The twins are rescued by Japheth, a man from the nearby oasis, but before he can bring them to safety, Dennys gets lost. Each boy is quickly embroiled in the conflicts of this time and place, whose populations includes winged seraphim, a few stray mythic beasts, perilous and beautiful nephilim, and small, long lived humans who consider Sandy and Dennys giants. The boys find they have more to do in the oasis than simply getting themselves home--they have to reunite an estranged father and son, but it won't be easy, especially when the son is named Noah and he's about to start building a boat in the desert.

Praise for Many Waters:

“Sandy and Dennys, twins and middle children in the Newbery-winning A Wrinkle in Time, are transported to the time just before the Flood. . . This will be enjoyed for its suspense and humor as well as its other levels of meaning.” —Kirkus Reviews

Intergalactic P.S. 3 by Madeleine L'Engle; illustrated by Hope Larson: A standalone story set in the world of A Wrinkle in Time!

“Sandy and Dennys, twins and middle children in the Newbery-winning A Wrinkle in Time, are transported to the time just before the Flood. . .This will be enjoyed for its suspense and humor as well as its other levels of meaning.” —Kirkus Reviews