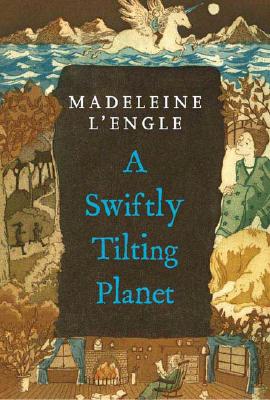 This is book number 4 in the A Wrinkle in Time Quintet series.

Book four in Madeleine L'Engle's A Wrinkle in Time Quintet. The Murry and O'Keefe Families enlist the help of the unicorn, Gaudior, to save the world from imminent nuclear war.

In A Swiftly Tilting Planet by Madeleine L'Engle, a companion to the Newbery Award winner A Wrinkle in Time and A Wind in the Door, fifteen-year-old Charles Wallace and the unicorn Gaudior undertake a perilous journey through time in a desperate attempt to stop the destruction of the world by the mad dictator Madog Branzillo.

They are not alone in their quest. Charles Wallace's sister, Meg--grown and expecting her first child, but still able to enter her brother's thoughts and emotions by "kything"--goes with him in spirit.

Charles Wallace must face the ultimate test of his faith and his will as he is sent within four people from another time, there to search for a way to avert the tragedy threatening them all.

Praise for A Swiftly Tilting Planet:

“Charles Wallace (A Wrinkle in Time), now 15, Meg, and the Murrys reappear in an intricately woven fantasy in which the boy time-spins through a tangle of history to find and mend the broken link that threatens to disturb the harmony of today.” —Booklist, starred review

“Charles Wallace (A Wrinkle in Time), now 15, Meg, and the Murrys reappear in an intricately woven fantasy in which the boy time-spins through a tangle of history to find and mend the broken link that threatens to disturb the harmony of today.” —Starred, Booklist