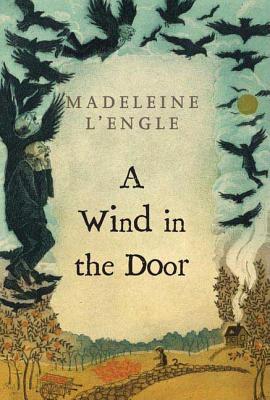 This is book number 2 in the A Wrinkle in Time Quintet series.

The second book in Madeleine L'Engle's A Wrinkle in Time Quintet. When Charles Wallace falls ill, Meg, Calvin, and their teacher, Mr. Jenkins, must travel inside C.W. to make him well, and save the universe from the evil Echthros.

Every time a star goes out, another Echthros has won a battle.

It is November. When Meg comes home from school, Charles Wallace tells her he saw dragons in the twin's vegetable garden. That night Meg, Calvin and C.W. go to the vegetable garden to meet the Teacher (Blajeny) who explains that what they are seeing isn't a dragon at all, but a cherubim named Proginoskes. It turns out that C.W. is ill and that Blajeny and Proginoskes are there to make him well – by making him well, they will keep the balance of the universe in check and save it from the evil Echthros.

Meg, Calvin and Mr. Jenkins (grade school principal) must travel inside C.W. to have this battle and save Charles' life as well as the balance of the universe.

Praise for A Wind in the Door:

"Complex concepts of space and time are handled well for young readers, and the author creates a suspenseful, life-and-death drama that is believably of cosmic significance. Complex and rich in mystical religious insights, this is breathtaking entertainment.” —School Library Journal, starred review

Intergalactic P.S. 3 by Madeleine L'Engle; illustrated by Hope Larson: Visit the world of A Wrinkle in Time in this standalone story!

“Complex concepts of space and time are handled well for young readers, and the author creates a suspenseful, life-and-death drama that is believably of cosmic significance. Complex and rich in mystical religious insights, this is breathtaking entertainment.” —Starred, School Library Journal