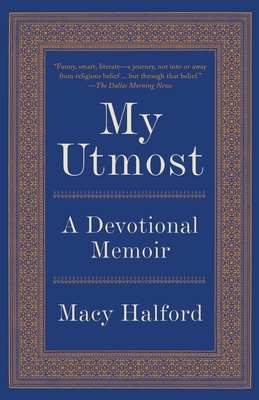 Raised as an Evangelical, Macy Halford eventually left Dallas for college and a career in New York City, where she found her life and beliefs evolving in a more secular direction. Yet every day she continued to read My Utmost for His Highest, a classic Christian text beloved by millions of Evangelicals. Eager to understand the book’s unique ability to bridge her two worlds, she quit her job at The New Yorker and began to look more deeply into the background of the devotional and its author, Scottish preacher Oswald Chambers. As Halford wrestles with what Chambers believed and why his book is so important to her, she gives us a captivating and candid meditation on what it means to be a Christian, a reader, and a seeker in the twenty-first century.

MACY HALFORD was born and grew up in Dallas, Texas; graduated from Barnard College; and worked at The New Yorker, where she eventually wrote most of the book reviews for the website. This is her first book. She is now living in Paris.

“Funny, smart, literate—a journey, not into or away from religious belief . . . but through that belief.” —The Dallas Morning News

“Ardently told. . . . Will be enjoyed by those who feel, as Halford does, ‘a complicated nostalgia’ for the evangelical faith—those who can’t and won’t defend all the old doctrines but find that religion still pulls at them.” —The New York Times Book Review

"This timely memoir seeks to reconcile an evangelical upbringing in Texas with literary life in a godless New York. . . . Halford is self-conscious about her love for Oswald Chambers’s daily devotional. . . . She reclaims Chambers as an artist manqué and a radical thinker.” —The New Yorker

“Absorbing . . . One of the best books of [its] kind I’ve read over the past twenty-five years or so.” —John Wilson, Commonweal

“Enlightening. . . . Chambers’s life and legacy, along with Halford’s own personal journey, prove to be a powerful lens through which to examine the roots of fundamentalist evangelicalism and its rocky relationship with the modern world.” —Publishers Weekly (starred review)