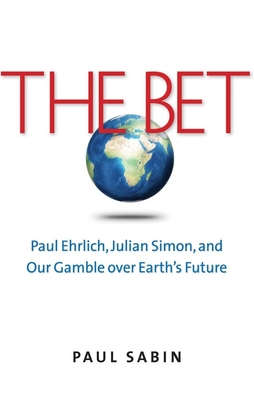 Are we headed for a world of scarce resources and environmental catastrophe, or will innovation and markets yield greater prosperity

In 1980, the iconoclastic economist Julian Simon challenged celebrity biologist Paul Ehrlich to a bet. Their wager on the future prices of five metals captured the public’s imagination as a test of coming prosperity or doom. Ehrlich, author of the landmark book The Population Bomb, predicted that rising populations would cause overconsumption, resource scarcity, and famine—with apocalyptic consequences for humanity. Simon optimistically countered that human welfare would flourish thanks to flexible markets, technological change, and our collective ingenuity. Simon and Ehrlich’s debate reflected a deepening national conflict over the future of the planet. The Bet weaves the two men’s lives and ideas together with the era’s partisan political clashes over the environment and the role of government. In a lively narrative leading from the dawning environmentalism of the 1960s through the pivotal presidential contest between Jimmy Carter and Ronald Reagan and on into the 1990s, Paul Sabin shows how the fight between Ehrlich and Simon—between environmental fears and free-market confidence—helped create the gulf separating environmentalists and their critics today. Drawing insights from both sides, Sabin argues for using social values, rather than economic or biological absolutes, to guide society’s crucial choices relating to climate change, the planet’s health, and our own.

Paul Sabin is associate professor, Department of History, Yale University. He was founding director of the Environmental Leadership Program and is the author of Crude Politics: The California Oil Market, 1900–1940.

"In his new book, The Bet, Paul Sabin has managed to write a work of serious historical scholarship about a vexing political issue—and make it read like a character-driven novel."—David Leonhardt, The New York Times, Economix blog

"Provides surprising insights for anyone involved in addressing the world’s 'wicked problems.' Most of all, it gave me new perspective on why so many big challenges get bogged down in political battles rather than being focused on problem-solving."—Bill Gates, founder of Microsoft, "The Best Books I Read in 2013," TheGatesNotes.com


"[A] gem of a book . . . Sabin provides a fascinating and highly readable archaeology of political science in America."—Publishers Weekly, starred review

"Not so fast, argues historian Paul Sabin, who in The Bet attempts to use their wager to narrate parallel biographies of Simon and Ehrlich, as well as a US political environmental history of the past half-century. The result is a revealing tale."—Jon Christensen, Nature

"A wonderful new book . . . and a fantastic introduction to population-resource debates of the late-twentieth century. It will be the required first reading on this topic in my future courses."—Roger Pielke, Jr., The Energy Collective

"An illuminating, judicious, and engaging examination of the conflict between environmentalists and their critics over the past five decades."—Glenn C. Altschuler, Tulsa World

"A joy to read; Sabin weaves a vivid historical narrative rich with classic characters. . . . The Bet is both a cautionary tale and a call to order."—Erle Ellis, Chronicle of Higher Education

"[A] good introduction to the history of modern environmentalism and an object lesson in how such debates become polarized and then locked in place."—Sharon Kingsland, Journal of American History

Won the Samuel and Ronnie Heyman Prize given by Yale University. Founded to honor outstanding scholarship by a junior faculty member in the Humanities.

"The Bet provides an important contribution to canonical works in environmental history and environmental studies. It is a remarkable story of a critical moment in the environmental movement, and Sabin has told it expertly."—Frederick R. Davis, Florida State University

"In telling the story of Ehrlich and Simon's bet, Paul Sabin offers a compelling analysis of two very different, but equally important, ways of understanding the future of humans and the environment that still shape the world of environmental politics today."—Jay Turner, Wellesley College

"Paul Sabin's The Bet is wonderfully conceived, sharply focused and entertainingly executed. In the story of a famous bet between two men of large egos, he manages to touch on the most basic problems we face in trying to come to terms with our current environmental crisis."—Richard White, author of Railroaded: The Transcontinentals and the Making of Modern America


"A refreshingly readable and consistently insightful portrait of the ferocious American politics of global population and resources since the 1960s – and of two implacable enemies who strangely resembled one another."—J.R. McNeill, author of Something New Under the Sun: An Environmental History of the 20th-century World

"Paul Sabin vividly and creatively explores the  half century battle over environmental policy by telling the story of the clash—and famous 'bet'—between Paul Ehrlich, the prophet of population doom, and Julian Simon, the advocate of technology and  markets. My own wager is that The Bet will also provide a very valuable and timely framework for understanding today’s great environmental debates.  In fact, I will double down on that bet!"—Daniel Yergin, Pulitzer-prize winning author of The Quest:  Energy, Security, and the Remaking of the Modern World and of The Prize