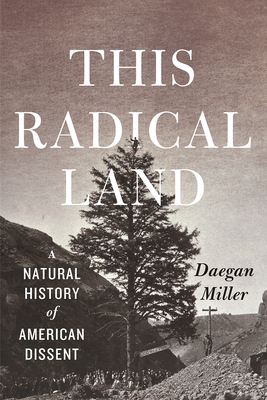 This Radical Land is a thoughtful and beautifully written collection of essays about citizens who did what they could to withstand the generally unquestioned tide of westward expansion. Miller's history is eye-opening and hopeful, giving intimations of the ways that we can resist the urge to separate social justice from environmental care.

“The American people sees itself advance across the wilderness, draining swamps, straightening rivers, peopling the solitude, and subduing nature,” wrote Alexis de Tocqueville in 1835. That’s largely how we still think of nineteenth-century America today: a country expanding unstoppably, bending the continent’s natural bounty to the national will, heedless of consequence. A country of slavery and of Indian wars. There’s much truth in that vision.

But if you know where to look, you can uncover a different history, one of vibrant resistance, one that’s been mostly forgotten. This Radical Land recovers that story. Daegan Miller is our guide on a beautifully written, revelatory trip across the continent during which we encounter radical thinkers, settlers, and artists who grounded their ideas of freedom, justice, and progress in the very landscapes around them, even as the runaway engine of capitalism sought to steamroll everything in its path. Here we meet Thoreau, the expert surveyor, drawing anticapitalist property maps. We visit a black antislavery community in the Adirondack wilderness of upstate New York. We discover how seemingly commercial photographs of the transcontinental railroad secretly sent subversive messages, and how a band of utopian anarchists among California’s sequoias imagined a greener, freer future. At every turn, everyday radicals looked to landscape for the language of their dissent—drawing crucial early links between the environment and social justice, links we’re still struggling to strengthen today.

Working in a tradition that stretches from Thoreau to Rebecca Solnit, Miller offers nothing less than a new way of seeing the American past—and of understanding what it can offer us for the present . . . and the future.

Daegan Miller has taught at Cornell University and the University of Wisconsin-Madison, and his writing has appeared in a variety of venues, from academic journals to literary magazines. He is on Twitter at @daeganmiller.

"A fascinating, often hopeful journey through the landscape histories of 'vibrant resistance'--anarchism, anti-slavery movements, social-justice activists--that have sprung up across North America over the last two centuries."
— Robert Macfarlane

"Though the histories in This Radical Land took place long ago, the era’s conflicted ideas about preservation, sustainability, and progress still confuse the debate over just what our relationship to nature should be."
— Bookforum

"Miller offers an engaging interplay of natural and political history, and demonstrates an eye for that single detail that can illuminate the whole damn diorama. . . . Miller succeeds in sketching an evocative if episodic shadow history of American expansion, and succeeds also in unearthing the 19th-century roots of an environmentalism founded in sustainable human engagement with the natural world."
— Times Higher Education

"A debut book that ranges across disciplines and decades to connect the natural environment--especially long-lived trees--to a scathing critique of American-style capitalism. Alternating abstract theory with impressive research, both bolstered by extensive sources . . . the author builds his case about understanding American history by examining destruction of the environment through essays grounded in the 19th century. . . . He offers an eclectic education often marked by soaring prose.”

"Inventive. . . . A creative linking of landscape and radicalism."
— Publishers Weekly

"Through interpretive brilliance and gorgeously crafted prose, Daegan Miller's This Radical Land: A Natural History of Dissent rescues this sense of environmental awe from excessive skepticism. . . . One of the most elegant and insightful examples of environmental writing I've seen in many, many years."
— Pacific Standard

"Nuanced, provocative, and immensely learned. . . . We would do well, through the conversation started here by Miller, to find the sparks of 'radicalism' in their relations with nature, and use those sparks to build our world."

"Seeing nature as wild, rather than curated wilderness or resource for the taking, gave Miller’s characters opportunities to chart alternate paths for the nation. If they can do it, Miller implies, why can’t we? . . .  Miller delights in his sources, and readers will feel that they are walking beside him as he paces off the seven feet of one of Thoreau’s maps and opens the heavy covers of the Union Pacific’s promotional book of photos. He targets his research precisely. Long lists of sources are not cited merely for the sake of impressive footnotes. At times, metaphor does more of his argument’s work than evidence, but that is largely due to Miller’s investment in his writing. He wants to woo his readers into following his intuitive leaps from deeply considered theory and historiography to the hard ground of a Utah rail bed."
— Flannery Burke

"Drawing on superb scholarly detective work, This Radical Land tells fascinating stories about the history of our ties to the land that give us an alternative to viewing natural spaces as either a resource to exploit or a wilderness museum for the privileged. Miller peels back the history to reveal that, however ignored, Americans have always resisted the exploitation of nature. Perhaps his more nuanced environmental history will inspire those today who, continuing the mute protest of the witness tree, would pull the planet back from the brink of death."
— Richard Higgins, author of Thoreau and the Language of Trees

"Daegan Miller rekindles a legacy of environmental dissent. The ideas and landscapes of nineteenth-century 'countermoderns' are signposts, still legible, to alternative futures. This book bears witness like a burning bush."
— Jared Farmer, author of Trees in Paradise: A California History

"Remarkable. . . . All told, Miller has produced a wonderful work, not just of environmental history, but also of nature writing in its highest form. This is a book worth reading."
— Environmental History

"Daegan Miller presents four essays rooted in landscapes of nineteenth-century America o make the case that there have always been thinkers and actors for whom nature had a higher purpose than capitalist greed. Trees--characterized as "the past's oldest witness" (from the book's first sentence)--play a central role throughout This Radical Land: A Natural History of America Dissent. Each essay has what Miller calls a witness tree that "stands as the central, organizing, orienting landmark" for the tale to be told (6)."
— Conner Bailey