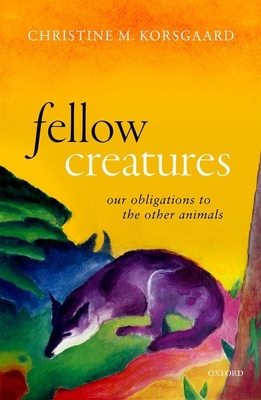 Christine M. Korsgaard presents a compelling new view of humans' moral relationships to the other animals. She defends the claim that we are obligated to treat all sentient beings as what Kant called ends-in-themselves. Drawing on a theory of the good derived from Aristotle, she offers an
explanation of why animals are the sorts of beings for whom things can be good or bad. She then turns to Kant's argument for the value of humanity to show that rationality commits us to claiming the standing of ends-in-ourselves, in two senses. Kant argued that as autonomous beings, we claim to be
ends-in-ourselves when we claim the standing to make laws for ourselves and each other. Korsgaard argues that as beings who have a good, we also claim to be ends-in-ourselves when we take the things that are good for us to be good absolutely and so worthy of pursuit. The first claim commits us to
joining with other autonomous beings in relations of moral reciprocity. The second claim commits us to treating the good of every sentient creature as something of absolute importance. Korsgaard argues that human beings are not more important than the other animals, that our moral nature does not make us superior to the other animals, and that our unique capacities do not make us better off than the other animals. She criticizes the marginal cases argument and advances a new
view of moral standing as attaching to the atemporal subjects of lives. She criticizes Kant's own view that our duties to animals are indirect, and offers a non-utilitarian account of the relation between pleasure and the good. She also addresses a number of directly practical questions: whether we
have the right to eat animals, experiment on them, make them work for us and fight in our wars, and keep them as pets; and how to understand the wrong that we do when we cause a species to go extinct.

Christine M. Korsgaard, Arthur Kingsley Porter Professor of Philosophy, Harvard University Christine M. Korsgaard is Arthur Kingsley Porter Professor of Philosophy at Harvard University, where she has taught since 1991. She is a fellow of the American Academy of Arts and Sciences, and a Corresponding Fellow of the British Academy in 2015. Before coming to teach at Harvard she heldpositions at Yale University, the University of California at Santa Barbara, and the University of Chicago, and visiting positions at Berkeley and UCLA. She is the author of The Sources of Normativity (1996), Creating the Kingdom of Ends (1996), The Constitution of Agency: Essays on Practical Reasonand Moral Psychology (2008), and Self-Constitution: Agency, Identity, and Integrity (2009).