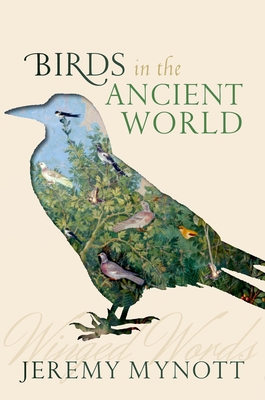 By Jeremy Mynott
Email or call for price
NOT AVAILABLE

Birds pervaded the ancient world, impressing their physical presence on the daily experience and imaginations of ordinary people and figuring prominently in literature and art. They provided a fertile source of symbols and stories in myths and folklore and were central to the ancient rituals of augury and divination. Jeremy Mynott's Birds in the Ancient World illustrates the many different roles birds played in culture: as indicators of time, weather and the seasons; as a resource for hunting, eating, medicine and farming; as domestic pets and entertainments; and as omens and intermediaries between the gods and humankind. We learn how birds were perceived - through quotations from well over a hundred classical Greek and Roman authors, all of them translated freshly into English, through nearly 100 illustrations from ancient wall-paintings, pottery and mosaics, and through selections from early scientific writings, and many anecdotes and descriptions from works of history, geography and travel. Jeremy Mynott acts as a stimulating guide to this rich and fascinating material, using birds as a prism through which to explore both the similarities and the often surprising differences between ancient conceptions of the natural world and our own. His book is an original contribution to the flourishing interest in the cultural history of birds and to our understanding of the ancient cultures in which birds played such a prominent part.

Jeremy Mynott is the author of Birdscapes: Birds in Our Imagination and Experience (2009), a book exploring the variety of human responses to birds, described by reviewers as the finest book ever written about why we watch birds (Guardian) and a wonderful rumination on birds and birders through space and time for anyone interested in our relationship with nature (THES). He has also published an edition and translation of Thucydides in the series, Cambridge Texts in the History of Political Thought and, more recently, Knowing your Place, an account of the wildlife in a tiny Suffolk hamlet. He has broadcast on radio and television, is a regular reviewer for the TLS and wildlife magazines, a founder member of New Networks for Nature, and is the former Chief Executive of Cambridge University Press and an Emeritus Fellow of Wolfson College, Cambridge.