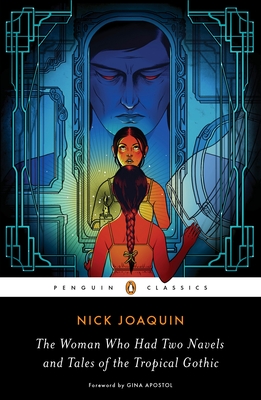 Celebrating the centennial of his birth, the first-ever U.S. publication of Philippine writer Nick Joaquin’s seminal works, with a foreword by PEN/Open Book Award–winner Gina Apostol

Nick Joaquin is widely considered one of the greatest Filipino writers, but he has remained little-known outside his home country despite writing in English. Set amid the ruins of Manila devastated by World War II, his stories are steeped in the post-colonial anguish and hopes of his era and resonate with the ironic perspectives on colonial history of Gabriel García Márquez and Mario Vargas Llosa. His work meditates on the questions and challenges of the Filipino individual’s new freedom after a long history of colonialism, exploring folklore, centuries-old Catholic rites, the Spanish colonial past, magical realism, and baroque splendor and excess. This collection features his best-known story, “The Woman Who Had Two Navels,” centered on Philippine emigrants living in Hong Kong and later expanded into a novel, the much-anthologized stories “May Day Eve” and “The Summer Solstice” and a canonic play, A Portrait of the Artist as Filipino. As Penguin Classics previously launched his countryman Jose Rizal to a wide audience, now Joaquin will find new readers with the first American collection of his work.

Introduction and Suggestions for Further Reading by Vicente L. Rafael

Nick Joaquin (1917–2004) is widely considered the most important Filipino writer in English. A novelist, poet, playwright, essayist, journalist, and biographer, he was honored for his work as a National Artist of the Philippines. His works include two novels, The Woman Who Had Two Navels and Cave and Shadows; three collections of short fiction; two volumes of poetry; and numerous works of nonfiction.

Gina Apostol won the Philippine National Book Award for her first two novels, Bibliolepsy and The Revolution According to Raymundo Mata. Her third novel, Gun Dealers’ Daughter, was shortlisted for the William Saroyan International Prize and won the PEN/Open Book Award. She lives in New York City and western Massachusetts.

Vicente L. Rafael a professor of history at the University of Washington, specializing in southeast Asian history. He has written widely on the political and cultural history of the Philippines, and his works include Contracting Colonialism, White Love and Other Events in Filipino History, The Promise of the Foreign, and, most recently, Motherless Tongues: The Insurgency of Language Amid Wars of Translation.

“Joaquin is akin to García Márquez in the extravagant, surreal imagery of his stories, the fatalistic humor, and the intricate weaving of history and memory. His magical Macondo was the very real Philippines, in all its beauty, splendor and ruin.”
—Jessica Hagedorn, American Book Award-winning author of Dogeaters

"Nick Joaquin was such a presence in my childhood. I remember having a collection of Joaquin's stories for children in my personal library. They were large, beautifully illustrated volumes that provided commentary to our culture in language so engaging for a child to understand. He has been a beloved storyteller for the Philippines for generations and now his memorable stories and play will be made available around the world."
—Lea Salonga, Tony Award-winning singer and actress

“Manila was Joaquin’s birthplace and his muse; yet the priests, socialites, and activists who populate these pages also evoke a globetrotting intellect and a wondrous universe all his own. This book brilliantly captures the singular genius of Nick Joaquin, and will seduce readers everywhere who are meeting this giant of Philippine literature for the first time.”
—Mia Alvar, PEN/Robert W. Bingham Prize–winning author of In the Country

“One cannot overstate what Nick Joaquin is to Philippine literature.  Writing in English with the melody of Spanish and Tagalog, Joaquin was the first Filipino writer to focus on the impossible contradictions of a tribal civilization overlain by Spanish and American world views.  And because that tribal civilization was woman-centered, Joaquin’s heroines are as complex, romantic and defiant as Madame Bovary and Anna Karenina.”
—Ninotchka Rosca, American Book Award-winning author of Twice Blessed

“Nick Joaquin was both a brilliant poet and intense chronicler of doubleness that is a defining attribute of postcoloniality, in his case a Hispanicized Philippines, complicated by Anglo American colonial rule. Underneath his use of English one senses the patriarchal tone of Spanish and the feminist susurrations of Tagalog. Hence, Joaquin’s world, particularly in A Portrait of the Artist as Filipino, is one where remembering offers both solace and grief, and a subtle critique of empire. An exemplar of postcolonial literature at its best, Joaquin moves us with his empathetic depictions of a divided consciousness. Penguin’s reissue of his works is a benediction and cause for celebration.”
—Luis H. Francia, PEN Open Book Award-winning author of Eye of the Fish: A Personal Archipelago

“Drafted in an age of strongmen, during the first two decades of the country’s postcolonial period between 1946 and 1965, the 11 works collected in this volume – 10 stories and a play – read as feminist. (…) In Joaquin’s worlds, female power is cause for awe. (…) It is rare for any woman to be granted some clarity in a desperate time – to be described as anything but hysterical. But this is Joaquin’s way: He writes sentences that are precise yet lyrical, tiny emotional ramps leading us to the truth – to the original wound – with dignity. (…) “There is a constant duality to Joaquin’s world – war and resistance, the hopeful and the tragic, the desperate and the despot. Joaquin was an essential voice in Filipino culture until his death in 2004, and this volume reminds us, as the historian Vicente L. Rafael states in his introduction, ‘of the need to endure the sense of loss amid the ruins upon ruins that remain.’ With the new ruins of President Rodrigo Duterte’s vicious antidrug campaign on the Philippines’ streets, such endurance takes on new urgency.”
—Melissa Chadburn, The New York Times Book Review

“A standout collection (…) a transporting read, and a fierce elegy for a past that never was.”
—NPR