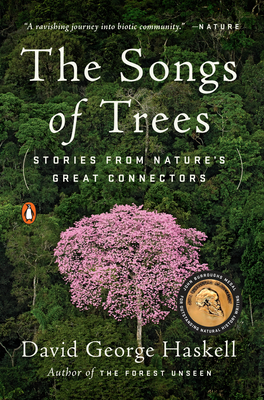 “Both a love song to trees, an exploration of their biology, and a wonderfully philosophical analysis of their role they play in human history and in modern culture.” —Science Friday

David Haskell has won acclaim for eloquent writing and deep engagement with the natural world. Now, he brings his powers of observation to the biological networks that surround all species, including humans. Haskell repeatedly visits a dozen trees, exploring  connections with people, microbes, fungi, and other plants and animals. He takes us to  trees in cities (from Manhattan to Jerusalem), forests (Amazonian, North American, and boreal) and areas on the front lines of environmental change (eroding coastlines, burned mountainsides, and war zones.)  In each place he shows how human history, ecology, and well-being are intimately intertwined with the lives of trees.

Scientific, lyrical, and contemplative, Haskell reveals the biological connections that underpin all life.  In a world beset by barriers, he reminds us that life’s substance and beauty emerge from relationship and interdependence.

David Haskell’s work integrates scientific, literary, and contemplative studies of the natural world. He is a professor of biology and environmental studies at the University of the South and a Guggenheim Fellow. His 2017 book The Songs of Trees won the John Burroughs Medal for Distinguished Natural History Writing. His 2012 book The Forest Unseen was a finalist for the Pulitzer Prize and the PEN/E.O. Wilson Literary Science Writing Award, and won the 2013 Best Book Award from the National Academies, the National Outdoor Book Award, and the Reed Environmental Writing Award. His new book, Sounds Wild and Broken: Sonic Marvels, Evolution’s Creativity, and the Crisis of Sensory Extinction, will be published in March of 2022.

To listen to a collection of sounds from the trees in this book, visit dghaskell.com.

One of Forbes’ Best Environment, Climate Science and Conservation Books of 2017

“In The Songs of Trees, Haskell champions a kind of ‘ecological aesthetics,’ where we find beauty in connectivity . . . Haskell sees trees as ‘nature’s great connectors,’ living symbols of the book’s great theme – that life is about relationships. . .we can find salvation in this view of life as a community.” —Ed Yong, The Atlantic

“Haskell’s exquisitely wrought ecological study documents the fate of 12 trees, around the globe and over time . . . a ravishing journey into biotic community.” —Nature

“What does an individual tree connect to, through its countless networks? Everything, to those who listen. Haskell’s writing is natural history, in every sense of the phrase, at its very best.” —Richard Powers, author of The Overstory, PBS Newshour

“Both a love song to trees, an exploration of their biology, and a wonderfully philosophical analysis of their role they play in human history and in modern culture.” —Science Friday, “The Best Science Books of 2017”

"Haskell trains his breathtaking observational skills, his eloquence and his capacity for hourslong contemplative practice on 12 trees around the globe . . . Haskell's sentences drip with poignancy and poetry. It's as if the whole world--every dust mote, every molecule of air, each reverberation of birdsong, rainfall or urban jackhammer--is slid beneath his magnifying lens. We see and hear beauties otherwise unimagined." —Chicago Tribune

“Haskell proves himself to be the rare kind of scientist Rachel Carson was when long ago she pioneered a new cultural aesthetic of poetic prose about science . . . it is in such lyrical prose and with an almost spiritual reverence for trees that Haskell illuminates his subject . . . a resplendent read in its entirety, kindred both to Walt Whitman’s exultation of trees and bryologist Robin Wall Kimmerer’s poetic celebration of moss.” —Brain Pickings

"Rich, often stunningly beautiful prose ... astounding powers of observation ... powerfully arguing against the ‘otherness’ of nature that denies our own wild being ... pushes the genre of nature writing in a welcome new direction." —The Burroughs Medal jury

“Over the course of ten graceful and fine-grained studies of different tree species, Haskell makes our relationship with the trees lambently obvious . . . The Songs of Trees has the diverse busyness of a thriving woodland. It is hard to think of a recent scientifically-inflected book on nature that is as fluent, compelling, and intoxicatingly rich.” —Times Literary Supplement

“The Songs of Trees is the equal of [The Forest Unseen] in its scientific depth, lyricism, and imaginative reach . . . Haskell’s intention is nothing less than to explore interconnection in nature across space and time, and to observe how humans can succeed, or fail, in the co-creation of networks of life that are more intelligent, productive, resilient and creative.” —The Guardian

“A great read for those wanting to be swept away to new locations while gaining a greater appreciation for the impact a single tree can have.” —American Forests

“The ceibo is the first of a fascinating litany of the world’s trees we come to know through the extraordinary observations of Haskell . . . This is a wise and eloquent reminder of the interconnectedness of all things and a lesson in how being open to the wisdom of trees, the great connectors, can help us understand ourselves and our place in the world.” – The Minneapolis Star Tribune

“Haskell writes with a poet’s ear and a biologist’s precision . . . like Rachel Carson’s Silent Spring and Stephen Jay Gould’s Wonderful Life, The Songs of Trees is greater than the sum of its parts:  it forces readers to consider complex, interrelated networks of the natural world, the scope and sweep of evolution, and the measurable effects of humanity on both.” – The Knoxville News Sentinel

“David George Haskell is a wonderful writer and an equally keen observer of the natural world. The Songs of Trees is at once lyrical and informative, filled with beauty and also a sense of loss.” – Elizabeth Kolbert, author of The Sixth Extinction

“Here is a book to nourish the spirit. The Songs of Trees is a powerful argument against the ways in which humankind has severed the very biological networks that give us our place in the world. Listen as David Haskell takes his stethoscope to the heart of nature - and discover the poetry and music contained within.”  -- Peter Wohlleben, author of The Hidden Life of Trees

"David George Haskell may be the finest literary nature writer working today. The Songs of Trees - compelling, lyrical, wise - is a case in point. Don't miss it." -- Deborah Blum, author of The Poisoner’s Handbook

“Inspiring . . . Haskell’s study of interconnectedness reveals as much as humans about it does trees.” – Publishers Weekly

“Haskell’s thoughtful prose lulls readers into extraordinarily in-depth studies of the molecular breakdown of dying trees, the sounds created by their great branches, and their manners of germination . . . Haskell is elegant in his observations . . . Blending history and science with the grace of a poet, this is nature writing at its finest.”
– ALA Booklist (starred)

“Engaging and eye-opening. . .Haskell’s message is straightforward and important:  we are a part of nature, and the trees with whom we share our environment are vital parts of our lives.”
– Kirkus Reviews

"David Haskell has opened up a new dimension in sound - and given us a powerful tool to rethink the way we look at the roots of our reality and how trees are the best way to guide us. A tour de force of sound and symbol. Read. Listen. Learn."
--Paul D. Miller aka DJ Spooky

“With a poet’s ear and a naturalist’s eye Haskell re-roots us in life’s grand creative struggle and encourages us to turn away from empty individuality. The Songs of Trees reminds us that we are not alone, and never have been.”
—Neil Shea, writer, National Geographic

"David Haskell does the impossible in The Song of Trees. He picks out a dozen trees around the world and inspects each one with the careful eye of a scientist. But from those observations, he produces a work of great poetry, showing how these trees are joined to the natural world around them, and to humanity as well."
—Carl Zimmer, author of A Planet of Viruses

"David Haskell writes with uncommon insight and sensitivity: listening and giving voice to the ineluctable networks in which trees and all human experiences are embedded."
—Peter Crane, President, Oak Spring Garden Foundation