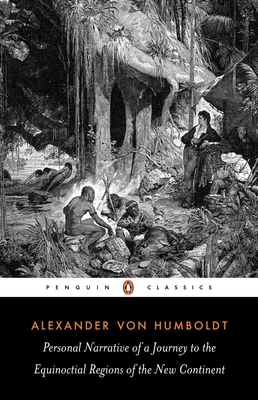 One of the greatest nineteenth-century scientist-explorers, Alexander von Humboldt traversed the tropical Spanish Americas between 1799 and 1804. By the time of his death in 1859, he had won international fame for his scientific discoveries, his observations of Native American peoples and his detailed descriptions of the flora and fauna of the 'new continent'. The first to draw and speculate on Aztec art, to observe reverse polarity in magnetism and to discover why America is called America, his writings profoundly influenced the course of Victorian culture, causing Darwin to reflect: 'He alone gives any notion of the feelings which are raised in the mind on first entering the Tropics.'

Alexander von Humboldt was born on the family estate at Tegel in Berlin in 1769. With his elder brother Wilhelm he was educated by tutors and then at Frankfurt, Göttingen and Hamburg Universities where he studied botany, literature, archaeology, electricity, mineralogy and the natural sciences. In 1790 he traveled abroad and published his first works in botanical and chemical journals. While at Jena he befriended Goethe. He worked in the Prussian Mining Administration until his mother died in 1796. A large inheritance enabled Humboldt to travel; after a few frustrations he was allowed by Charles IV of Spain to travel in the Spanish American colonies at his own expense, with his companion Aimé Bonpland. After five years in the New World (1799-1804) Humboldt settled in Paris to begin publishing his encyclopaedic Relation historique du voyage aux regions équinoxiales du nouveau continent, finally completed in thirty volumes in 1834, where the Personal Narrative comprised volumes 28 to 30. Humboldt was not only a prominent figure in the Parisian scientific world but also Chamberlain to Friedrich Wilhelm III, and Councilor of State to Friedrich Wilhelm IV. In 1829 he traveled to Russia and Central Asia and published his account in French in 1843. In 1834 he began his comprehensive survey of creation, Kosmos, completed posthumously in 1862. He died in 1859, a bachelor, and was buried in the family vault at Tegel, honored as one of the great speculative scientific travelers of the nineteenth century.