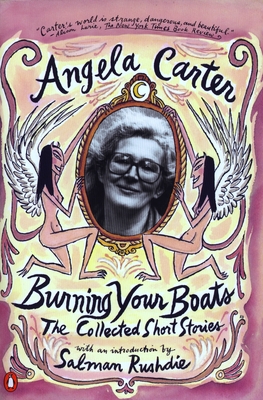 Whether you're diving into the wondrous world of Angela Carter for the first time or your appetite for her work is already insatiable (there is no in between), this is a collection to treasure. It includes the re-worked fairy tales for which she is probably best known (The Bloody Chamber) and the hard to find and equally, if not more, amazing collections (Saints and Strangers and American Ghosts and Old World Wonders being my favorites). — From Molly's favorites

One of our most imaginative and accomplished writers, Angela Carter left behind a dazzling array of work: essays, citicism, and fiction. But it is in her short stories that her extraordinary talents—as a fabulist, feminist, social critic, and weaver of tales—are most penetratingly evident. This volume presents Carter's considerable legacy of short fiction gathered from published books, and includes early and previously unpublished stories. From reflections on jazz and Japan, through vigorous refashionings of classic folklore and fairy tales, to stunning snapshots of modern life in all its tawdry glory, we are able to chart the evolution of Carter's marvelous, magical vision.

Angela Carter (1940 -1992) wrote nine novels and numerous short stories, as well as nonfiction, radio plays, and the screenplay for Neil Jordan's 1984 movie The Company of Wolves, based on her story. She won numerous literary awards, traveled and taught widely in the United States, and lived in London.
Born in Bombay in 1947, Salman Rushdie is the author of six novels, including Grimus, Shame, The Satanic Verses, The Moor's Last Sigh, and The Ground Beneath Her Feet, and a volume of essays, Imaginary Homelands. His numerous literary prizes include the Booker Prize for Midnight's Children and the Whitbread Prize for The Satanic Verses.

"Her imagination was one of the most dazzling of this century."
—Marina Warner

"An amazing plum pudding … you should not miss this book."
—Margaret Atwood, Toronto Globe & Mail