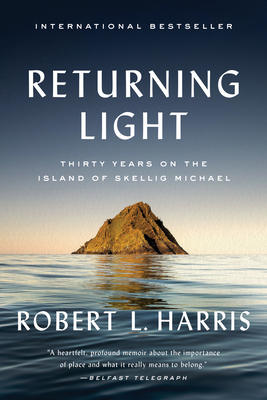 A meditative nature memoir from the lighthouse keeper on Skellig Michael, one of Ireland’s most remote locations, evocatively detailing this otherworldly island while exploring the human relationship with place, nature, and solitude.

“On Skellig Michael, thousands of birds appear and disappear, erecting towers, coming together in wings of movement which build and unravel over the empty sea. Often, no one else is there to stand beside me on the island. The mind wanders; links with the past are easily made; ancient ways of viewing things come alive.”

In 1987, Robert Harris happened upon an unusual job posting in the local paper—a new warden service was being set up on the island of Skellig Michael, and the deadline was imminent. Just weeks later he was on his way to set up camp in one of Ireland’s most remote locations, unaware that he would be making that same journey every May for the next 30 years.

Here he transports us to the otherworldly island, a place that is teeming with natural life, including curious puffins that like to visit his hut. From the precipice he has observed a coastline that is relatively unchanged for the last thousand years—a beacon of equilibrium in an ever-changing world.

But the island can be fierce too. It’s inhabitable for only five months of the year, and solitude can quickly become isolation as bad weather rolls in to create a veil between Skellig Michael and the rest of the world, when the dizzying terrain can become a very real threat to life.

A beautiful and evocative work of nature writing, Returning Light is an extraordinary memoir about the profound effect a place can have on us, and how a remote location can bring with it a great sense of belonging.

"A heartfelt, profound memoir about the importance of place and what it really means to belong." — Belfast Telegraph

"The fascination of Returning Light, ironically, is not the 'turrets and crags' of the rock but Harris’s approach to understanding the psyche and how it responds to a way of living, monastic in some aspects, but without the community. ... Reading Returning Light is a spiritual experience and one that should be proselytised throughout Ireland." — Irish Examiner