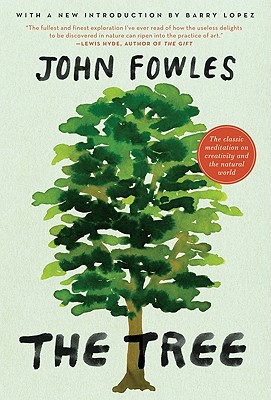 The classic meditation on creativity and the natural world

“For years I have carried this book. . . with me on travels to reread, ponder, envy. In prose of classic gravity, precision, and delicacy, Fowles addresses matters of final importance.” —W. S. Merwin, Los Angeles Times Book Review

“The Tree is the fullest and finest exploration I’ve ever read of how the useless delights to be discovered in nature can ripen into the practice of art.” —Lewis Hyde, author of The Gift

First published a generation ago, The Tree is renowned English novelist John Fowles's provocative meditation on the connection between the natural world and human creativity, and a powerful argument against taming the wild.

In it, Fowles recounts his own childhood in England and describes how he rebelled against his Edwardian father’s obsession with the “quantifiable yield” of well-pruned fruit trees and came to prize instead the messy, purposeless beauty of nature left to its wildest.

The Tree is an inspiring, even life-changing book, one that reaffirms our connection to nature and reminds us of the pleasure of getting lost, the merits of having no plan, and the wisdom of following one’s nose wherever it may lead—in life as much as in art.

John Fowles was born in Leigh-on-Sea in Essex, England, and won international recognition with his first novel, The Collector, in 1963. His many other bestselling novels include The Magus (1966), Daniel Martin (1977), and The French Lieutenant’s Woman (1969), which was turned into an acclaimed film starring Meryl Streep and Jeremy Irons. John Fowles died in 2005.

“The Tree is part memoir, part explanation and part warning, one of the most beautiful, succinct and prescient pieces of writing we have.”
— Los Angeles Times Book Review

“A revelation.”
— The Paris Review "Daily"

“A gentle plea for wilderness [and] an argument for art and the imagination.”
— Chicago Tribune, Editor's Choice

“[A] great book. . . . [T]he perfect little thing to roll up in your pocket and take with you for a lunch in the park. It’s like having a laid-back, wide-ranging conversation with one of the greatest novelists of the 20th century.”
— The Stranger

“[A] beautifully honed plea for us to “be” in the natural world, to seek human creativity through the wild. . . . Beyond the tree and beyond the woods, Fowles challenges us to embrace the unpredictable, the untamable, the unquantifiable.”
— Women's Voices for Change

“THE TREE is the fullest and finest exploration I’ve ever read of how the useless delights to be discovered in nature can ripen into the practice of art.”
— Lewis Hyde, author of THE GIFT

“Please read this book. It says the most important thing, and with a lovely succinctness. Step off the narrow path, so cleverly engineered for you, into the deep cathedral of the woods-where there are no engineers and the true self abides.”
— Lydia Millet, author of the Pulitzer Prize finalist LOVE IN INFANT MONKEYS

“THE TREE defies easy definition and even genre. Whatever else it happens to be-memoir, philosophy, natural history-the book is a kind of forest, and Fowles a masterful field guide. He shows us the hidden place where the woods and literature converge.”
— Brad Kessler, author of GOAT SONG

“Delightful... The real subject of this arboreal excursion is not trees at all, but the importance in art of the unpredictable, the unaccountable, the intuitive, the not discernibly useful.”
— Atlantic Monthly

“The most original argument for wilderness preservation I have encountered.”
— Washington Post

“[John Fowles] is a master of style, evident in the ease with which he transforms the abstract into the highly tangible, without sacrificing any of the subtleties.”
— Christian Science Monitor

“Beautiful. . . . A cross between Thoreau’s “Walden” and John Berger’s “Ways of Seeing,” with a dash of “The Gift,” Lewis Hyde’s cult-classic manifesto on creativity.
— New York Times, Paper Cuts

“The Tree is a powerful, absorbing and beautifully written meditation on the connection between man and nature. . . . [A] magnificent and perfectly poised argument for a form of conservation that is even more pertinent now than when it was first published.”
— Financial Times