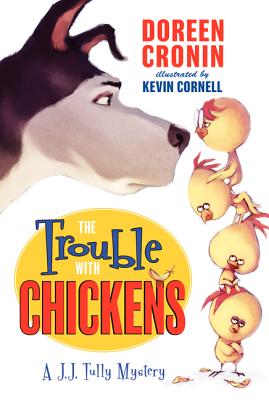 “When retired search-and-rescue dog J.J. Tully agrees to help a chicken find her missing chicks, he gets himself into a peck of trouble! Doreen Cronin's hilarious story, paired with Kevin Cornell's laugh-inducing illustrations, results in one of the funniest books ever! This clever mystery is filled with lots of 'eggstra' surprises and will make one terrific read-aloud for families and classrooms.”
— Joyce Tiber, Next Chapter Bookshop, Mequon, WI

From the bestselling, award-winning author-illustrator team of Doreen Cronin and Kevin Cornell comes the first book in a heavily illustrated, hilarious chapter book series about the adventures of a dog detective. Perfect for fans of Sara Pennypacker's Clementine series and Jarrett J. Krosoczka's Lunch Lady series.

J.J. Tully is a former search-and-rescue dog who is trying to enjoy his retirement after years of performing daring missions saving lives. So he's not terribly impressed when two chicks named Dirt and Sugar (who look like popcorn on legs) and their chicken mom show up demanding his help to find their missing siblings. Driven by the promise of a cheeseburger, J.J. begins to track down clues. Is Vince the Funnel hiding something? Are there dark forces at work—or is J.J. not smelling the evidence that's right in front of him?

Doreen Cronin is the New York Times bestselling author of Diary of a Worm, Diary of a Spider, and Diary of a Fly, as well as Click, Clack, Moo: Cows That Type, a Caldecott Honor Book, and Giggle, Giggle, Quack. She lives in Brooklyn, New York, with her husband and their daughters.

Kevin Cornell rests his head in Philadelphia, where he and his wife match wits daily with a terrifying dachshund. Other monsters Kevin has recently tamed include The Terrible Two series by Mac Barnett and Jory John, Count the Monkeys by Mac Barnett, and Lulus Mysterious Mission by Judith Viorst.

“Cronin brings her droll humor to the chapter book set with great success. Fast-paced and funny, with interesting vocabulary and a well-constructed plot, this is terrific fare for readers who are ready to move beyond picture books, but are intimidated by longer works.” — Publishers Weekly (starred review)

“The noirlike detective Tully and the funny chickens running around, well, like chickens make appealing characters, especially as drawn by Cornell, who knows how to get TV cartoon–style humor out of the action.” — Booklist

Praise for Doreen Cronin’s DIARY OF A FLY: “Will have kids laughing out loud.” — School Library Journal (starred review)

Praise for Doreen Cronin’s DIARY OF A FLY: “Like its predecessors, this diary is a crowd-pleaser.” — ALA Booklist

Praise for Doreen Cronin’s DIARY OF A SPIDER: “Hits squarely on the middle-grade funnybone.” — Bulletin of the Center for Children’s Books