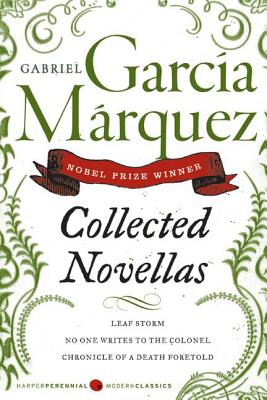 Renowned as a master of magical realism, Gabriel Garcia Marquez has long delighted readers around the world with his exquisitely crafted prose. Brimming with unforgettable characters and set in exotic locales, his fiction transports readers to a world that is at once fanciful, haunting, and real.

Leaf Storm, Gabriel Garcia Marquez's first novella, introduces the mythical village of Macondo, a desolate town beset by torrents of rain, where a man must fulfill a promise made years earlier.

No One Writes to the Colonel is a novella of life in a decaying tropical town in Colombia with an unforgettable central character.

Chronicle of a Death Foretold is a dark and profound story of three people joined together in a fatal act of violence.

Gabriel García Márquez was born in 1927 in the town of Aracataca, Columbia.Latin America's preeminent man of letters, he was awarded the Nobel Prize in Literature in 1982. García Márquez began his writing career as a journalist and is the author of numerous other works of fiction and nonfiction, including the novels The Autumn of the Patriarch and Love in the Time of Cholera, and the autobiography Living to Tell the Tale. There has been resounding acclaim for his life's work since he passed away in April 2014.

"Every scene, every gesture sings life and denies death...He is an absolute master."
— New York Times on NO ONE WRITES TO THE COLONEL

“Garcia Marquez has extraordinary strength and firmness of imagination and writes with the calmness of a man who knows exactly what wonders hecan perform.”
— Alfred Kazin, New York Times Book Review

“It is the genius of Garcia Marquez that fatalism and possibility somehow coexist, that dreams redeem, that there is laughter even in death.”
— Jonathan Leonard, New York Times

“For García Márquez the world contains mysteries that we need and can easily live with, but also miracles that we cannot understand, that speak for forces unknown to men.”
— Newsweek on LEAF STORM

“A virtuoso performance: a tour de force…The great vision and heart of García Márquez are what make it as large in spirit as it is small in size.”
— Jonathan Yardley, Washington Post Book World on CHRONICLE OF A DEATH FORETOLD