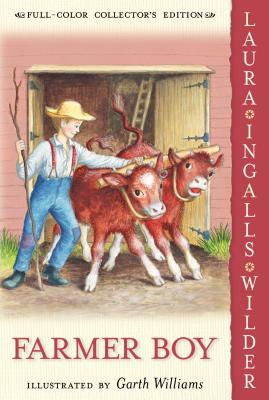 This is book number 2 in the Little House series.

While Laura Ingalls grows up in a little house on the western prairie, Almanzo Wilder is living on a big farm in New York State. Almanzo and his brother and sisters help with the summer planting and fall harvest. In winter there is wood to be chopped and great slabs of ice to be cut from the river and stored. Almanzo wishes for just one thing—his very own horse—but he must prove that he is ready for such a big responsibility.

Based on the childhood of Laura’s husband, Almanzo Wilder, Farmer Boy is the second book in the award-winning Little House series, which has captivated generations of readers with its depiction of life on the American frontier.

Laura Ingalls Wilder (1867–1957) was born in a log cabin in the Wisconsin woods. With her family, she pioneered throughout America’s heartland during the 1870s and 1880s, finally settling in Dakota Territory. She married Almanzo Wilder in 1885; their only daughter, Rose, was born the following year. The Wilders moved to Rocky Ridge Farm at Mansfield, Missouri, in 1894, where they established a permanent home. After years of farming, Laura wrote the first of her beloved Little House books in 1932. The nine Little House books are international classics. Her writings live on into the twenty-first century as America’s quintessential pioneer story.