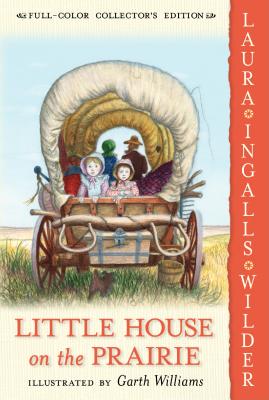 This is book number 3 in the Little House series.

Laura Ingalls and her family are heading to Kansas! Leaving behind their home in the Big Woods of Wisconsin, they travel by covered wagon until they find the perfect spot to build a little house on the prairie. Laura and her sister Mary love exploring the rolling hills around their new home, but the family must soon get to work, farming and hunting and gathering food for themselves and for their livestock. Just when the Ingalls family starts to settle into their new home, they find themselves caught in the middle of a conflict. Will they have to move again?

The nine books in the timeless Little House series tell the story of Laura’s real childhood as an American pioneer, and are cherished by readers of all generations. They offer a unique glimpse into life on the American frontier, and tell the heartwarming, unforgettable story of a loving family.

Laura Ingalls Wilder (1867–1957) was born in a log cabin in the Wisconsin woods. With her family, she pioneered throughout America’s heartland during the 1870s and 1880s, finally settling in Dakota Territory. She married Almanzo Wilder in 1885; their only daughter, Rose, was born the following year. The Wilders moved to Rocky Ridge Farm at Mansfield, Missouri, in 1894, where they established a permanent home. After years of farming, Laura wrote the first of her beloved Little House books in 1932. The nine Little House books are international classics. Her writings live on into the twenty-first century as America’s quintessential pioneer story.

“Based on the real-life experiences of the author, this series introduces a new generation of readers to life on the American frontier. I couldn’t stop reading it! I recommend this book for people who love history.” — Brightly